Q1. What does an electric circuit mean?

Ans. A closed and continuous path of electric devices, switching devices, source of electricity atc. that are connected by conducting wires.

Ans. The SI unit of electric current is ampere (A).

The current flowing through a conductor is said to be 1A, if a charge of 1 coulomb (C) flows through it in 1 second(s).

Q3. Calculate the number of electrons constituting one coulomb of charge.

Q1. Name a device that helps to maintain a potential difference across a conductor.

Ans. Electric cell or A battery is a device that helps to maintain a potential difference across a conductor.

Q2. What is meant by saying that the potential difference between two points is 1V?

Ans. The potential difference between two points is said to be 1 volt if 1 joule of work is done in moving 1 coulomb of electric charge from one point to the other.

Q3. How much energy is given to each coulomb of charge passing through a 6 V battery ?

Q1. On what factors does the resistance of a conductor depend?

Ans. Resistance of a conductor depends upon:

(i) Nature of the material of the conductor.

(ii) Length of the conductor.

(iii) Cross-sectional area of the conductor.

Q2. Will current flow more easily through a thick wire or thin wire of the same material, when connected to the same source? Why?

Ans. The current flows more easily through a thick wire than through a thin wire because the resistance is inversely proportional (R ∝ 1/A) to the area of cross-section.

Q3. Let the resistance of an electrical component remains constant while the potential difference across the two ends of the component decreases to half of its former value. What change will occur in the current through it?

Therefore, the current through the component becomes half of its original value.

Q4. Why are the coils of electric toasters and electric irons made of an alloy rather than a pure metal?

Ans. The coils of electric toaster and electric iron are made of an alloy rather than a pure metal because of the following reasons:

(i) The resistivity of an alloy is higher than that of a pure metal.

(ii) It has a high melting point.

(iii) They do not oxidise.

Q5. Use the data in Table to answer the following:

(a) Which among iron and mercury is a better conductor?

(b) Which material is the best conductor?

Ans. (a) Iron because its resistivity is less than mercury.

(b) Silver is the best conductor as it has least resistivity.

Total resistance of the circuit = R

Since all the three resistors are connected in series, so, the equivalent resistance R is equal to the sum of all resistance.

Q1. Judge the equivalent resistance when the following are connected in parallel: 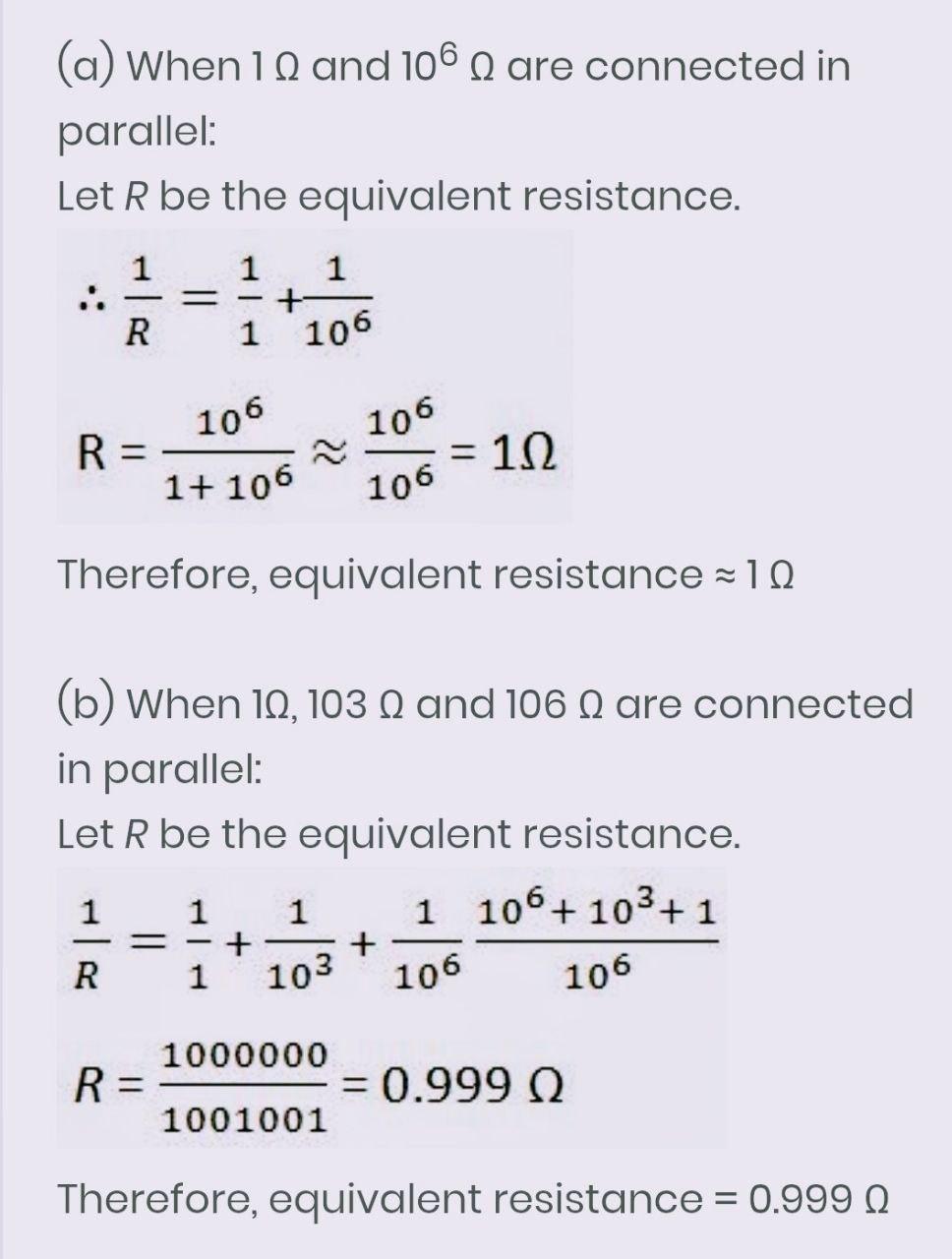 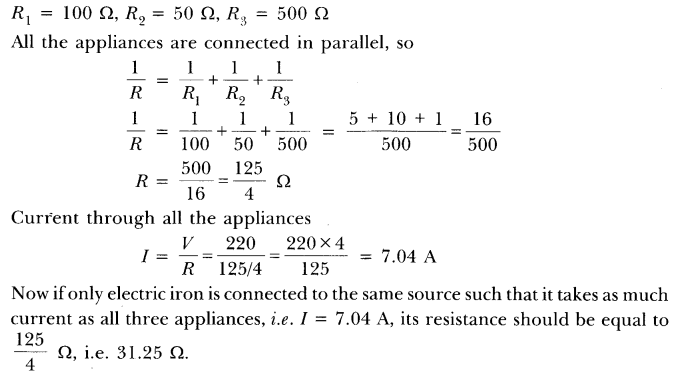 Ans. Following are the advantages of connecting electrical devices in parallel with the battery:

1.Parallel circuits device the current among the electrical devices so that they can help necessary amount of current to operate properly.

2. If one appliance fails to work, other will continue to work properly.

(a) In order to get 4 Ω, resistance 2 Ω should be connected in series with the parallel combination of 3 Ω and 6 Ω. 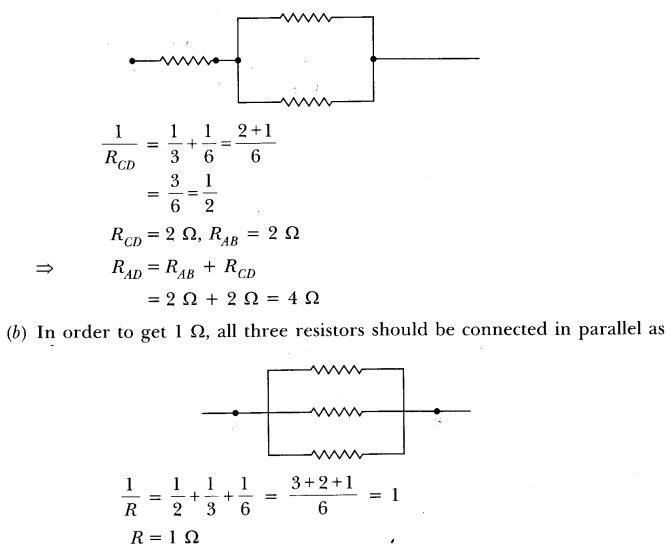 (a) The highest resistance is secured by combining all four coils of resistance in series.

(b) The lowest resistance is secured by combining all four coils of resistance in parallel.

Q1. Why does the cord of an electric heater not glow while the heating element does?

Q2. Compute the heat generated while transferring 96000 C of charge in one hour through a potential difference of 50 V.

Q3. An electric iron of resistance 20 Q takes a current of 5 A. Calculate the heat developed in 30 s.

Q1. A piece of wire of resistance R is cut into five equal parts. These parts are then connected in parallel. If the equivalent resistance of this combination is R’, then the ratio R/R’ is:

Q4. Two conducting wires of same material and of equal lengths and diameters are first connected in series and then parallel in a circuit across the same potential difference. The ratio of heat produced in series and parallel combinations would be:

Q5. How is a voltmeter connected in the circuit to measure the potential difference between two points?

Ans. To measure the potential difference between them a voltmeter should be connected in parallel across any two points in a circuit.

Q6.  A copper wire has a diameter 0.5 mm and resistivity of 1.6 X 10-8 Ωm. What will be the length of this wire to make its resistance 10 Ω? How much does the resistance change if the diameter is doubled?

Q7. The values of the current I flowing in a given resistor for the corresponding values of potential difference V across the resistor are given below:

Plot a graph between V and I and calculate the resistance of that resistor.

Q8. When a 12 V battery is connected across an unknown resistor, there is a current of 2.5 mA in the circuit. Find the value of the resistance of the resistor.

Therefore, the resistance of the resistor is 4.8 kΩ

Ans. (i) If two 6 Ω resistance are connected in parallel then the equivalent resistance is 6/2 = 3 Ω

Now 12 Ω and 6 Ω resistors are connected in parallel.

Q12. Several electric bulbs designed to be used on a 220 V electric supply line, are rated 10 W. How many lamps can be connected in parallel with each other across the two wires of 220 V line if the maximum allowable current is 5 A?

Q13. A hot plate of an electric oven connected to 220 V line has two resistance coils A and B, each of 24 Q resistance, which may be used separately, in series, or in parallel. What are the currents in the three cases?

Q14. Compare the power used in the 2 Ω resistor in each of the following circuits.

According to Ohm’s law,

I is the current through the circuit

This current will flow through each component of the circuit because there is no division of current in series circuits. Hence, current flowing through the 2 Ω resistor is 2 A. Power is given by the expression,

Power consumed by 2 Ω resistor is given by

Therefore, the power used by the 2 Ω resistor is 8 W.

Ans. Energy consumed by an electrical appliance is given by the expression,H= Pt

Power of the appliance = P

Q17. An electric heater of resistance 8 Ω draws 15 A from the service mains 2 hours. Calculate the rate at which heat is developed in the heater.

Thus, the rate at which heat is developed in the heater is 1800 joule per second.

(a) Why is tungsten used almost exclusively for filament of electric lamps?

(b) Why are the conductors of electric heating devices, such as bread-toasters and electric irons, made of an alloy rather than a pure metal?

(c) Why is the series arrangement not used for domestic circuits?

(d) How does the resistance of a wire vary with its area of cross-section?

(e) Why are copper and aluminum wires usually employed for electricity transmission?

(b) Conductors of electric heating devices are made of alloy because It has more resistivity and less temperature coefficient of resistance.

(c) (i) All appliances do not get the same potential in series arrangement.

(ii) If one device fails, the circuit is broken and all devices stop working.

(e) Copper and Aluminium wires are used for transmission of electricity because they have low resistivity and are very good conductors of electricity.